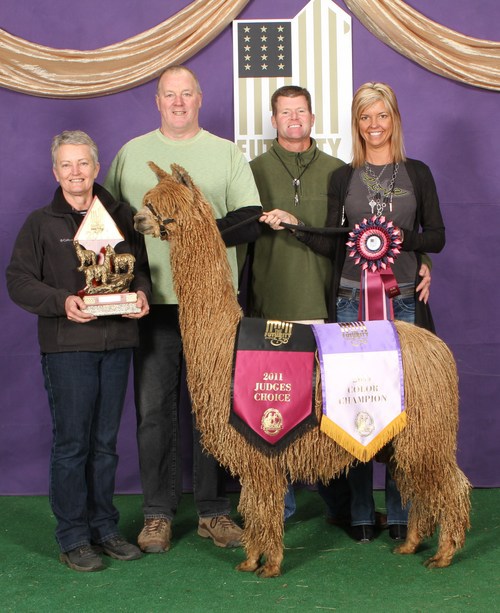 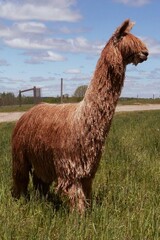 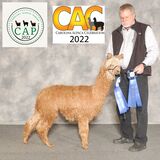 In the words of Pucara International:

In only his first year of production Wyuna produced suris from Parkview Alpacas, who won male and female Judges Choice Awards, along with the Get Class, as juvies at the 2013 IAO! Wyuna also came second to Chakotah, his sire, at the 2013 Futurity, in the Dark Get of Sire Class. He won the CABA Get Class against the Kahuna team!!! He turned the Futurity Get team result around in 2014 by winning -- putting his sire Chakotah in second place! He also won the IAO Get class beating Pucara Kahuna his grandfather. Every once in a while you get a beauty and indeed Wyuna is every bit as good as any suri we have ever created. He had a sterling show career as a juvie but in 2011 blazed! He was unbeaten in five shows winning all the championships he competed in and all the Judges Choices line ups he was in!

He is a combination of the best genetics we can possibly supply plus the best from other farms. Just look at his ARI certificate. He pulls in the famous Bruxo and Augustina through Macgyver as a great grand sire. He also pulls in Pucara Kahuna through Pucara Kalina the best Kahuna daughter we ever bred at that stage, then again Pucara Kahuna comes through Pucara Lorretta on the dam's side. We are biased but Pucara Kahuna is probably now the foremost white herdsire in US history continually winning Get classes and Futurity herdsires of the year. Then add Uribe on through the sire, Chakotah, and then Pucara Allegro via her dam, Pucara Autumnall Goddess, a Produce of Dam winner. Pucara Allegro was a dominant herdsire in Australia with 39 championship progeny of which 17 went on to win Supreme Championship!

Wyuna displays an elite fleece. Fiber for the Future! It is incredibly fine. It displays independence of lock that accentuates the high luster within. Those locks display solidity that emphasizes the density combined with silky soft handle that an elite fleece should possess. All of this atop a stellar frame with girth of chest, robust stature and spring of rib. He is eye candy. He shows off those suri beards we love so much with a strong masculine head and struts about like he understands the nobility of his genotype and phenotype. A real camelid playboy!

It was one of our proudest moments in suri breeding to watch the judges in 2012, especially at GWAS and The Nationals go bonkers in their descriptions of his fleece and his potential.
Purchase Terms 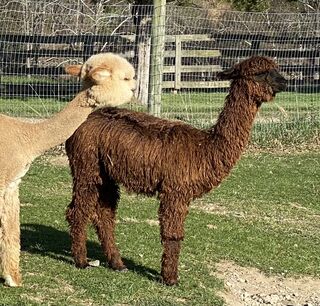 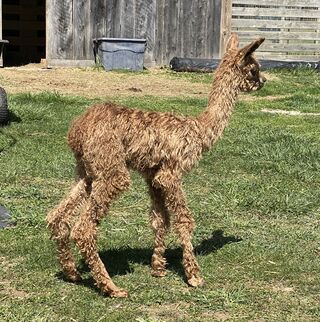 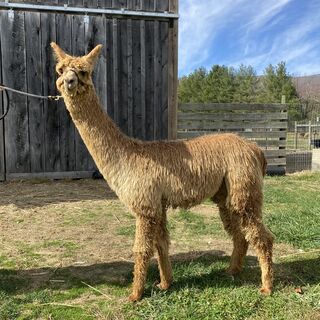 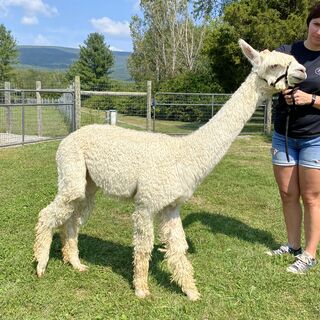 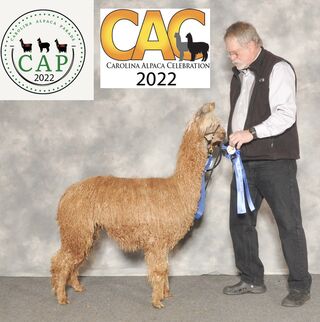 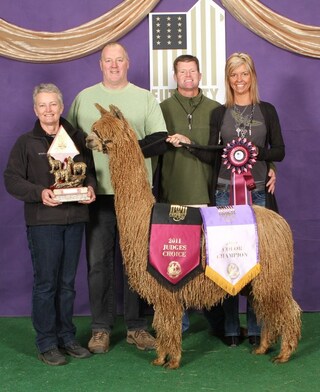 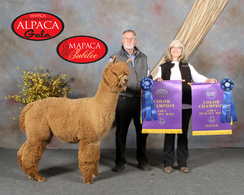 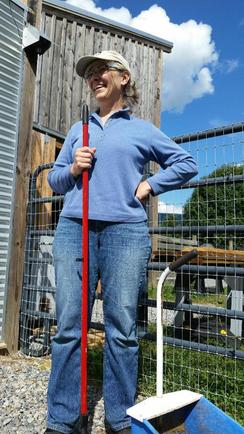